A few days ago I was enticed into thinking if there is an app for generating names (no, not a startup idea). You know, something along the lines of “generate 10 Indian names”. I didn’t know the answer, but it got me thinking about names. Before the flame of this random musing could die down, I found a dataset of names, thanks to mbejda. The dataset consists of Hispanic, Indian, Caucasian and African American names. I had the dataset, so something had to be done.

Now perhaps you have read Karpathy’s fantastic blog on RNNs and what they do.

Here is one of quotes from the blog:

We’ll train RNNs to generate text character by character and ponder the question “how is that even possible?”

Yes, it’s pretty mind-blowing. The blog goes into the details of how it’s done. Here’s a short summary of what RNNs do: RNNs can take a bunch of text, say T, and learn to generate new text that would seem to be taken from T. For example, we can train an RNN on all the works of William Shakespeare, and the RNN can, in turn, generate new text that would seem to be written by Shakespeare. The blog I’ve linked to contains this and many other interesting examples. The way RNNs do this is by learning to “predict the next character” in the sequence given the hitherto seen characters.

Putting it together, I had:

Now, I didn’t feel like throwing all these RNNs away, so wondered what would happen if I feed, say, the “Indian Name Generator” with a first few characters from a Caucasian name, and let it generate the rest? Will it try to create a name that sounds Indian? So I ran a bunch of these experiments, and present the somewhat more interesting results in this post. I also used seeds from unconventional names, like those of Pokémons and wrestlers. It was fun to see all these different RNNs take a stab at creating a name that sounds to be from their domain:

This post has 6 section: The introduction just got over. We’ll now take a quick look at the data, followed by a discussion on how the input is converted to a representation that can be used for training these name generators. We’ll then look at some details of the model, how the predictions are done and the name styles transferred, and finally present the results.

The code, with cleaned + processed dataset, and notes on how to run the training and scoring processes, is located here.

Looking at the Data

Although there is no limit to the number of different analysis we can run, we’ll present only two here in the interest of space (and the attention span): i) the most popular names and ii) the name length distributions. Looking at the most popular names will give us a feel for the dataset, and the name length distributions were added to add more plots and make this post look fancier (and it’s used somewhere down the line, too).

The name length distributions are next plotted for each of the races. It seems like short names (perhaps without a surname) are popular among Indians, giving rise to the minor mode in the distribution. Hispanic names tend to be longer, as indicated by the fat tail following the mean. 15-ish seems to be the most popular name length across the races (here’s one thing you can take away from the post). 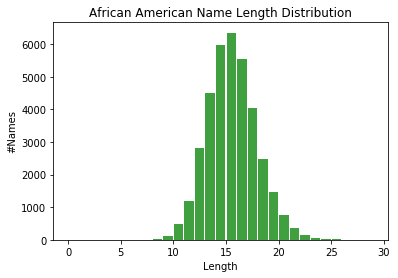 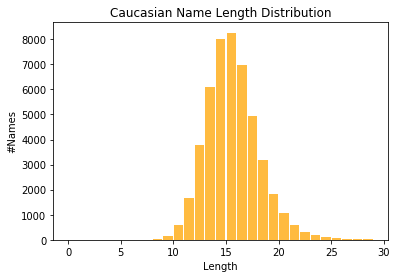 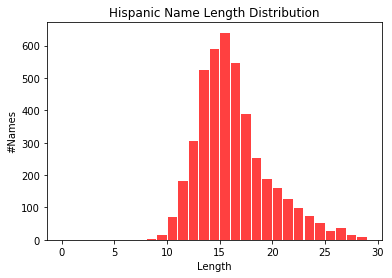 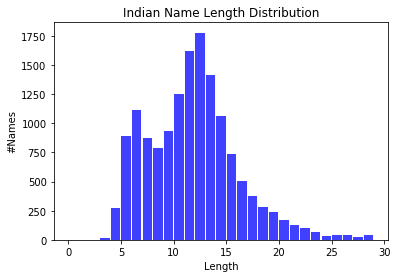 In this section, we will spend some time looking at how do we take a bunch of these names and convert them into a form that can be fed to an RNN. We will get to that representation in three steps: encoding, standardization, and embeddings.

We convert each character in a (string) name to a number using the following mapping:

All the names are converted to lowercase English alphabets, with a space separating different components of a name. Every name ends with a special name end character (“#”). Every other character is mapped to a “.”, an invalid character substitute. For example, “joe” would be converted to [9 14 4 27].

Note that we retain the name end character (#) even after the truncation.

So far, we have standardized each name to a fixed length, added a character to mark the end of the name, and encoded the name from an array of chars to an array of integers.

If you don’t know what embeddings are at all, I recommend checking out this or this link.

The tl;dr of the technique is that each of the characters is mapped to an array of numbers. The array is called an embedding, and the length of the array is the dimensionality of the embedding. For example, if we choose to use 5-dimensional embeddings, it just means that every character is mapped to a 5-dimensional real vector. We can start with pre-trained embeddings, or learn them as part of the training process, which is what our model does. In our setting, that means that we will hopefully learn embeddings that makes it easier for us to predict the next character in the name. With 5-dimensional embeddings, “joe” will now be a matrix of 26 rows and five columns.

The following three lines of code is all that’s needed add embeddings. embeddings is a matrix, which has one row for each character in our vocabulary. Concretely, if we had used 5-dimensional embeddings, the embeddings matrix would have the dimensions 29 x 5; each of the characters would have a corresponding array of length 5. tf.nn.embedding_lookup takes in the input, which is batch_size x max_name_length, and maps (looks up) each character in the standardized name to an embedding, to yield an input with dimensions batch_size x max_name_length x n_embeddings.

Tensorboard can help in visualizing embeddings using PCA and t-SNE. The t-SNE visualization of the embedding matrix from the Indian name generator is as follows. As you can see, the vowels are all close to each other, which hints at the fact that the learned embeddings wrap some linguistic properties of the names pertaining to the race, and are perhaps useful in generating new ones.

The particular form of RNNs that we use for this exercise is an LSTM. This book has a pretty good explanation of the LSTMs, and this neat blog post is another standard reference for the topic. A high-level overview of the model follows. Each character in the normalized name is converted to the corresponding embedding vector, and the entire input name becomes a matrix or name embeddings. The name embeddings are then fed to the first LSTM in the stack. The output from this first LSTM is fed to a second LSTM. The second LSTM is connected to a dense layer, which emits a logits vector of length 29. An argmax over the logits vector is used to calculate the loss and generation. A diagram of the computation graph generated by Tensorboard is as follows:

An instance of the model with made up numbers is shown below. It’s a replica of this diagram from this blog I’ve already linked to.

Since we have discussed a lot, let’s quickly recap before moving ahead. Some of the following may seem to be a repeat from the introduction because it sort of is.

We train one generator per dataset. Thus, we have a model that has learned to predict the next few characters in an Indian name given the first few, and so on. We then seed each of these generators with a few characters from a name, say “Der” from “Derek,” and compare the results.

The prediction process is illustrated in the figure below, followed by the code. 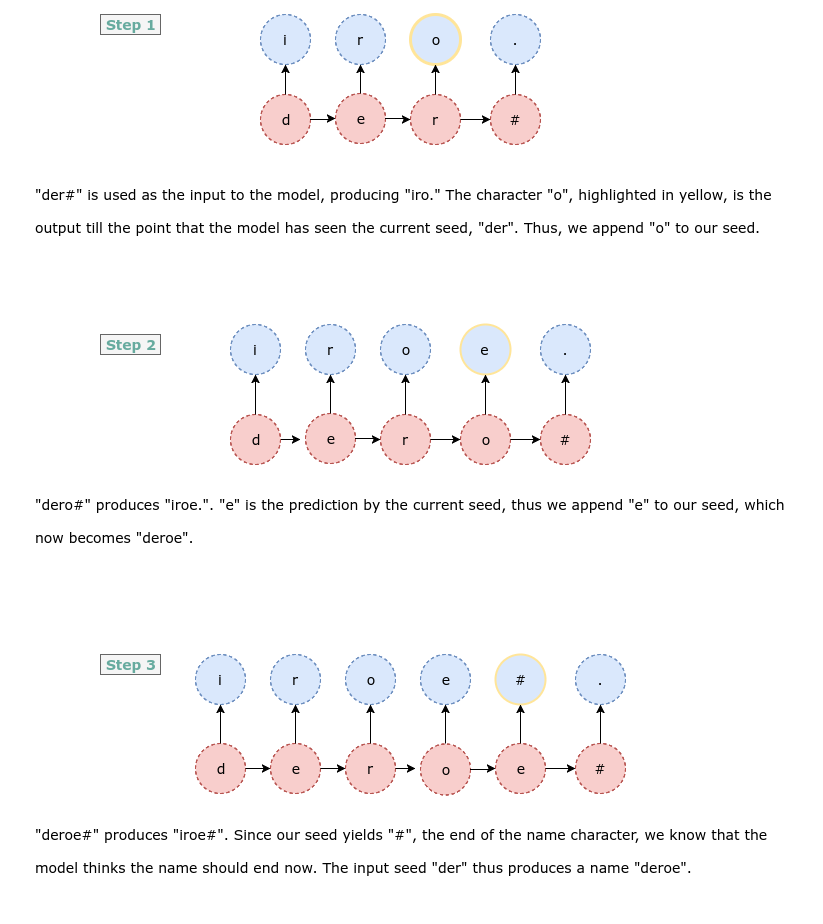 The results are compiled in the following table. The first column is the name, the second the seed used as an initial input to the model. The subsequent columns list the names generated by the different generators using the given seed.

Results from this test file are as follows. I hope the post was useful, please feel free to contact me for any questions/comments at amn.madaan@gmail.com.